Does Camo Help When Photographing Wildlife?

I recently participated in a thread in the forums over at Naturescapes about the value of using camo for wildlife photography. I thought I might share my thoughts on the subject here also. The following is a slight rewrite of my reply over there. (If you’re not familiar with Naturescapes.net, it is one of the larger online communities that is dedicated to nature photography). 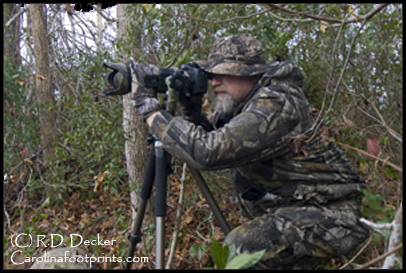 Whether discussing lens coats and tripod leg covers, or clothing, blinds and hides, camo is simply one tool of many available to the wildlife photographer. There is a time and a place where it will make difference. While how big of an effect it has is going to depend on the species and even on the individual animal, it can be a benefit. Waterfowl, for example, are going to be extremely shy of humans. I doubt you’re going to visit any of the national wildlife reserves that are known for waterfowl while wearing street clothes and have a great deal of success, unless you’re sitting in a blind and if in a blind, obviously, you’re using a type of camo. After all, you’re talking about photographing an animal that is hunted relentlessly during its migration from the north. They’re going to be shy of humans and for good reason! Of course the resident Mallards on the duck pond at the local park are going to be a totally different story. Those birds are used to receiving handouts from people. All you really need to photograph those kinds of birds is a handful of corn and a camera.

Many people are under the impression that all animals are color-blind.  Of those that think that way many wrongfully believe that color-blind animals see in black and white.  While it’s true that most mammals have some degree of color blindness, they don’t see the world as black and white.  Many mammals are red-green color blind.  What that means is they cannot distinguish the color red from the color green.  This is one reason why deer hunters can successfully hunt while wearing safety orange hats or vests.  Other mammals, bears for example, are believed to have excellent color vision.  Birds and most reptiles also have good color vision.  In fact they probably see a greater range of colors than we humans do!  So understanding what colors your intended subject can see and may react to is a worthwhile consideration when preparing to go out into the field.

When dealing with wildlife there’s no doubt that movement and noise are bigger factors in not scaring away your subjects than clothing color and pattern. I’ve seen some amazing images where the photographer positioned them self on a shoal during a rising tide… bellying down in the sand before the birds arrived… then waited patiently and quietly for birds to approach. By the same token, I’m sure that’s a more successful technique in tan/sand colored clothing than if one were wearing hunter orange. While planning, patience and stillness plays a huge role, seeming to fit into the surroundings doesn’t hurt. I’ve also seen some marvelous photos taken by folks wearing “street clothes,” though usually not brightly colored togs. They sit patiently still, waiting for the animals to approach them. But even with the greatest patience and stillness, I don’t doubt that blending in the surroundings would even result in more close encounters of the wildlife kind.

A lot of my photography is created from a kayak. I have a bright yellow boat. I get very close to a lot of birds in that thing, but others want nothing to do with it. Honestly, my next boat will not be a bright color like that. I do think it’s a hindrance at times. I also hate that most kayak gear is brightly colored. Try finding a paddle/splash jacket that’s not bright yellow, red or blue! The kayak industry seems to overlook a potentially valuable market; hunters and nature photographers. When I replace my boat I’ll be looking at camo, “sand,” dark green or blue boats. Those seem to make the most sense in the environments where I shoot. While the animals will certainly still be aware of my presence, I suspect that my presence will seem less alarming to them. It’s not so much about being unseen as seeming non-threatening to your subjects.

Honestly, I doubt a little camo on a black lens makes a lot of difference. But then again, what can it hurt? On a big, honking white lens? Well common sense suggests that all that white can’t be good for stealth in a natural setting. In the end, whether one wears earth-tones or camo may not be the biggest factor in their success in the field. But it is a tool that can help. Why not give yourself every possible advantage you can? Time in the field with a camera is much too short and infrequent to not try to maximize your chances.