The weather has simply been terrible lately. Combine that with a fairly full schedule and I’m finding myself suffering from a major case of cabin fever. It’s been so wet here lately that even setting-up in the backyard to photogrpah birds around the feeder is a challenge. It would take very little activity to turn my yard into a mud bog! But at least there’s plenty of time to dream and to plan the adventures that will come with Spring.

One thing I’m looking forward to when warmer weather arrives is doing a bit of kayaking. There are some very wonderful natural areas around the Crystal Coast, but many of them are only accessible by water. The kayak will allow me to explore some areas that I wouldn’t be able to otherwise. One advantage of a kayak, or so I’m told by those that use them for wildlife photography, is that birds and animals aren’t as skittish of kayakers as they are hikers. Most of the things that threaten them in the wild come from the land, not the water. Another advantage is that a kayak sits you closer to the surface of the water… that gives you a lower angle of view in your photos. And, of course, it’s a fairly quiet way of approaching wildlife, unlike a skiff with its outboard motor. It should be fun.

In selecting a kayak with photography in mind I probably made a pest of myself on a few of the nature forums. I asked a lot of questions of folks with experience… possibly to the point of being annoying. But it is so easy to spend money poorly when setting-out in a new direction and I really wanted to make a sound decision. From my research I decided that I wanted a “recreational” rated boat, as it would likely be a bit more stable. (For some reason camera gear and baths don’t mix well!) This style of boat also tends to have a larger cockpit making it easier to shoot from. I also learned that there is some advantage to length. The longer boats tend to move through the water faster, easier, straighter and require a bit less effort to paddle. While I started out looking at 10 foot boats I ended up with a 12 footer. I settled on a Prodigy 12.0 by Perception. The three boats I was most interested in were the Prodigy, the Pamlico or Pungo by Wilderness Systems, and the Dirigo by Old Town. I suspect any of the three would have met my requirements.

Since this is a new endeavor for me I wanted to keep things as economic as possible. Anytime embarking on some new outdoor activity there’s a real possibility of finding it’s not what one thought it would be! As such I shopped around for a used boat. Many times kayaking outfitters will sell off their rental boats during the off-season. These kinds of purchases can save one a bit of money. I ended up buying a rental program boat from Paddle Creek, Wake Forest, NC. I found them to be very friendly and helpful throughout the process.

So here I sit, daydreaming of adventures to come. As warm weather arrives I hope to provide some reports, and imagery of course, from places like the White Oak River, Newport River, Back Sound, Shakleford Banks, Rachael Carson Estuarine perserve and other wet and wild places around the Crystal Coast. Since I really don’t have an image taken from a kayak yet, but it wouldn’t feel right to make a post without a photo, how about a nice symbol of Spring? Taken recently along the Neusiok Trail near the Pine Cliff recreation area, an Eastern Bluebird… certainly a creature of the spring in my mind. 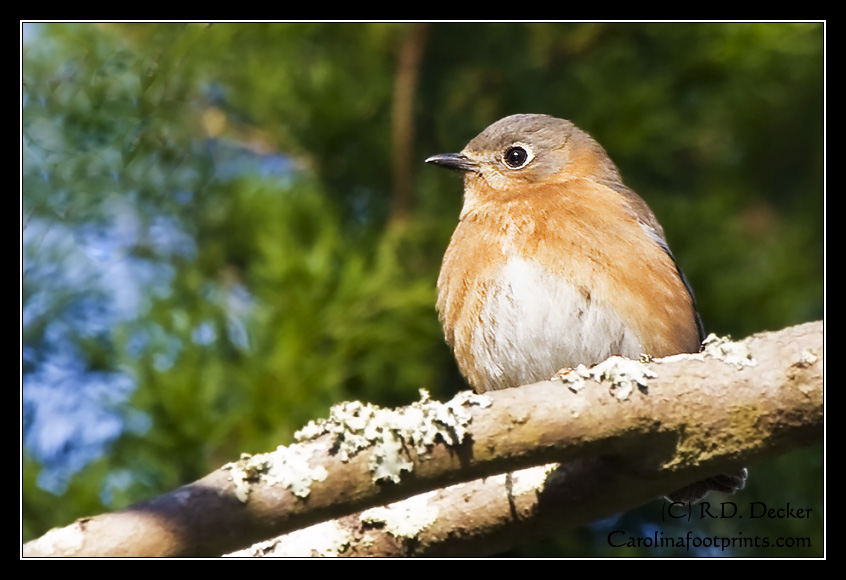 This entry was posted in Kayaking, Nature Photography and tagged Kayak, Neusiok, Spring.