Up A Creek With A Paddle: Newport River Trip

With the wonderful weather we’ve been blessed with I decided it was time to break out the kayak and give it a paddle. My float plan was fairly simple, I’d put in at the wildlife access along Chatham Street/Old Hwy. 70 near Newport (Google Earth: Newport River Park, NC) about mid-way through the rising tide. My thinking was, being the Newport river is a tidal stream, the incoming tide might somewhat off-set the river’s flow and make upstream paddling a bit easier. I’d paddle upstream until the river got too small/shallow, it got too late or I got too tired, then turn around and ride the flow back to the launch point.

The river is fairly wide and slow up to and slightly beyond the Highway 70 bridge. A bit beyond the bridge, after passing a few houses built along the banks, it narrows appreciatively and the flow increases. That trend continues… the further upstream you go, narrower river, swifter current. I’d say I got a pretty decent workout from the trip. It’s hard to say exactly how far I paddled upstream. I tried to track and measure the trip using Google Earth but the river becomes so narrow and the trees so thick that tracking the river on the satalite imagery becomes impossible! My best guesstimate is I paddled somewhere between 3 and 3.5 miles from the launch before turning back

The Newport River is quite serpintine in nature. It winds and twists through thick forest. I discovered that when traveling up river, against a healthy current, that turning sharp corners was a little bit of a challenge. As I was making a turn the water flow would be hitting the boat somewhat broad-side, fighting against the turn. Not an impossible feat obviously. Probably magnified by a lack of experience and physical conditioning on my part.

On the trip upstream I did see a bit of wildlife. On several occassions large turtles abandoned their sun bathing to scurry into the water as I neared. I observed several Piliated Woodpeckers along the way, as well as smaller woodpeckers and Northern Flicker. I came across several pairs of Wood Duck and had one hen allow me to pass by quite closely without it flying. I also saw a number of hawks, an owl and a couple of Great Blue Herons. The problem being moving upstream and constantly fighting my way around turns and past/through log jams, it wasn’t practical to pull my camera out of its dry-bag to try to attempt a photo on the trip up.

The down-stream trip was, of course, much easier. Turning the kayak around bends in the river was nearly effortless and for a large part of the trip back there was little need to even paddle. Now I clould get away with having the camera out and possibly getting a shot of something interesting. Unfortunately I must have scared everything away on the way up as I saw very little on the quiter trip down. I was stuck with snapping a few scenery shots just to get a little practice taking pictures from a kayak.

Overall it was an enjoyable few hours and I’m sure I’ll repeat the trip sometime. Looking at a topographic map I’m wondering if the water is deep and wide enough where the Newport River crosses Nine-foot Road to get away with putting in there and floating way down to the launching ramp at Newport. I’d need to get a second paddler with a second vehicle involved in that adventure, but it could be quite fun. It’d defineately be more condusive to photography. Maybe I’ll give it a go some time. I’m also looking forward to exploring downstream from the launch. In that direction the river gradually widens until it empties into Bogue Sound between Beaufort and Morehead City. 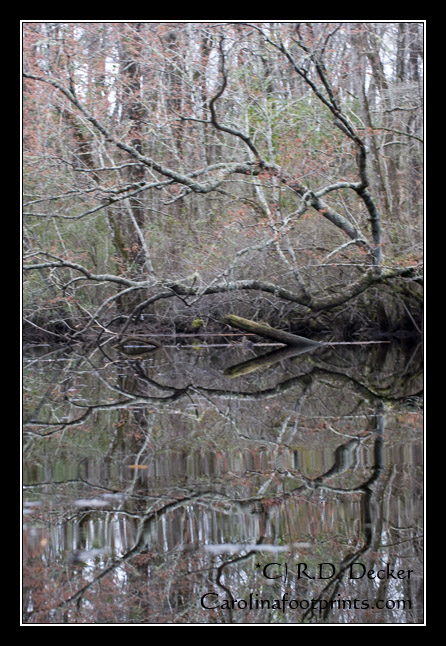 This entry was posted in Kayaking.