A Tough Shot from a Kayak!

I launched my kayak last Saturday afternoon with the goal of paddling into a blackwater swamp and sitting for a while in hopes of getting a shot of a Prothonotory Warbler. It was suppose to rain that hint and all-day Sunday. As I started my paddle the wind was starting to pick-up and I could see clouds building off in the distance. I made it into the swamp as planned but my stay was cut a bit short as light was fading quickly because of the increasing cloud cover. Finally I realized it was time to head back to the ramp or risk a return trip in total darkness. As I made my way to the ramp I noticed a Great Blue Heron feeding along the river bank. It was a picturesque location and certainly was worth an attempt at getting a shot.

The challenge was going to be getting a useable shot. In the dim light getting a shutter speed that would be fast enough to make a sharp image was going to be tough. I started cranking up the ISO, going all the way up to iso 1250! A high setting like that would almost insure a lot of noise in the resulting image. Checking my exposure settings, even at that high ISO setting, my shutter speed was going to be less than 1/100 of a second. That’s much too slow to insure a sharp image when hand-holding a 500mm lens. In order to get to a faster shutter speed I opened my aperture up. I know this lens and this lens is at its sharpest at around f/8.0. Opening the aperture wider than that can result in images that a bit soft. I ended up compromising, choosing an aperture of f/7.1. That got me a shutter speed of 1/125 of a second. A speed still much slower than the theoretical minimum target of 1/500 of a second for hand-holding a long lens like this. Considering I’m shooting from a kayak on choppy water and ideally I’d have a shutter speed closer to 1/1000 of a second! In these lighting conditions this was the best I was going get, 1/125 at f/7.1 and iso 1250. I tried to steady myself, holding as carefully and steady as possible and squeezed off a few shots. Honestly I was optimistic about what I’d find on the memory card.

When I got home I unloaded and stored the kayak away, put the camera up and spent some time visiting with my wife. I didn’t even bother to check the images for several days. I knew the odds of getting and image that was even suitable for use on the internet were pretty low. Much to my surprise there was a fairly decent image in the series. Was it perfect? Not by a long shot but the noise wasn’t too bad and it was reasonably sharp. A little post processing work in photoshop include a touch of noise reduction resulted in a fairly pleasing image.

Sometimes conditions are tough. When you understand the limitations of your equipment it’s easy to convince yourself to not even try to make and image in some situations. Personally I think it’s always worth the effort to give it a try. You probably won’t get anything for the effort except the comfort that you gave it your best shot. Then again, sometimes you get lucky. Below is the image described above. 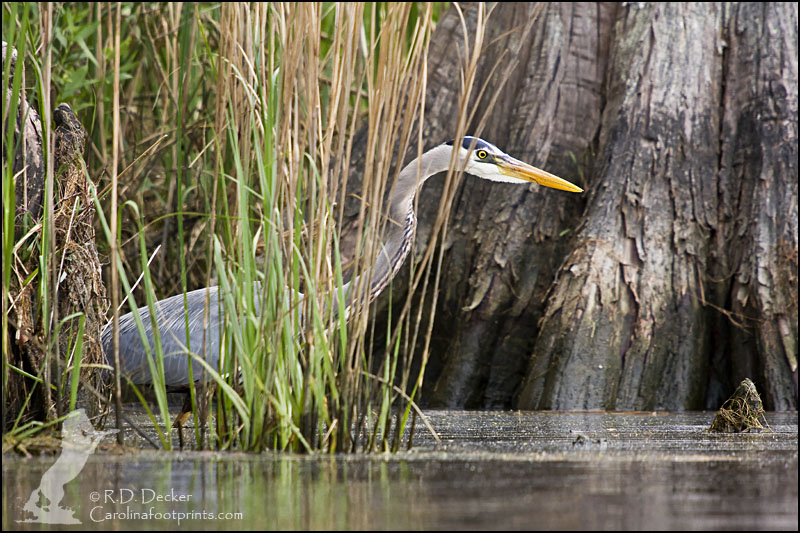 Now available my “Introduction to Kayak Photography” eBook. Learn how to approach skittish wildlife from the water to add an interesting perspecitve to your photographs. Take advantage of the low introductory price while it lasts.